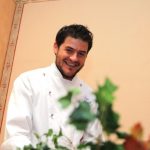 Share with your friends
Submit
Skip to content
Peter Brunel has been working with Dario Loison for years, creating new recipes based on Panettone.
His story
Born in 1975, originally from Val di Fassa, Peter boasts a well-established experience in the catering sector. After graduating from culinary school in Tesero, he moved to Bolzano, where he took his first steps in haute cuisine under the guidance of Chef Giorgio Nardelli at the Parkhotel Laurin. In 2000, he moved to Villa Negri in Riva del Garda, where, in 2003, at the age of just 28, he won the coveted Michelin star. He then moved on to lead the Chiesa restaurant in Trento and, since 2010, has been coordinating the Palagio59 restaurant in Rignano sull'Arno, where in 2012 he became the author of "Chef's Circus", a series of gastronomic events during which great starred chefs combine their culinary imagination with the sweet notes of live jazz.
His Cuisine
A key role in his professional growth was played by his predisposition to continuous research and a sensitivity that goes far beyond the kitchen, often turning to the worlds of art and architecture into sources of inspiration from which to draw new ideas for the presentation of his culinary creations. His culinary concept skillfully blends tradition and innovation; his cuisine is refined and creative; he uses unusual and precious ingredients from all over the world, without forgetting to keep alive the traditions of his own land.
His restaurant
Borgo San Jacopo Overlooking the banks of the Arno River, the Borgo San Jacopo restaurant offers a fine dining experience and a memorable view of the Ponte Vecchio. Taste the finest traditional Italian dishes reinterpreted in an innovative way by Michelin-starred chef Peter Brunel, who has found a way to invent an authentically Italian menu with stimulating openings to distant worlds. The protagonists in the kitchen are the richness of the raw materials, the genuineness of the culinary basics and the most balanced experimentation.
I LOVE LOISON
Peter Brunel has been collaborating with Dario Loison for years, creating new recipes based on Panettone: "We have invented many things together, and for me the greatest is Panettone in Tubetto, an innovative idea that was then the driving force behind the start of this beautiful collaboration with Dario, which continues year after year with new sweet and savory recipes based on Loison Panettone".
*The interview was carried out while the chef was still working at the Borgo San Jacopo restaurant (Florence).
The Restaurant
Peter Brunel Ristorante gourmetVia Linfano, 47
38062, Arco TN
0464 076705www.peterbrunel.com/itLanguages: Italiano - Inglese - TedescoOpen: Martedì - DomenicaOpening time: Dalle 12.00 alle 14.00 - Dalle 19.30 alle 22.00
Other portraits
PORTRAITS/ChefMatteo Grandi – Matteo Grandi Restaurant in Basilica
PORTRAITS/ChefDanilo Angè – Chef, Consultant, Professor, Author – Milan
Peter Brunel Ristorante gourmetVia Linfano, 47
38062, Arco TN
0464 0767053674Languages: Italiano - Inglese - TedescoOpen: Martedì - DomenicaOpening time: Dalle 12.00 alle 14.00 - Dalle 19.30 alle 22.00
<?