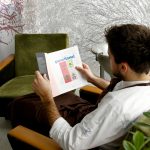 Share with your friends
Submit
Skip to content
He won his first Michelin star at just 25 years old, but his bright future is written in his DNA: in Venetian, "cogo" means cook!
Update 1/3/2019 - The report was made when Lorenzo Cogo was working at his restaurant El Coq in Marano Vicentino, before moving to Vicenza. Now the chef works as a consultant.
His story
Cuisine is a family tradition for Lorenzo, since his father runs a trattoria, the Bistrot in Marano Vicentino. Lorenzo grew up among the aromas and flavors of traditional cuisine. His basic rules are an extreme knowledge of the product and the application of the right techniques in the kitchen to best express the final result. Lorenzo began working with some of the biggest names in Australian restaurants: Mark Best's Marque Restaurant, Tetsuya's and Quay, all in Sydney, before returning to Europe, in London, to Heston Blumenthal's The Fat Duck.
His restaurant
His is an "instinctive" cuisine, going beyond emotion and towards a deep and sensorial experience, where the gastronomic and cultural tradition of the territory constantly meets research and experimentation. At dinner, his menu aims to be a path where you can give into a multi-sensory experience, minimal and essential, where Lorenzo's cuisine meets experience and blends with experimentation and quality.
I LOVE LOISON
Dario and I share a beautiful friendship and mutual respect ever since we met on 19 July 2011, my birthday. On that occasion he gave me a copy of his book "Mille e un Panettone" with an almost prophetic dedication: "A small gift for a great warrior of flavor: today you’re 25 and soon the stars will rise". Incredibly enough, within a few months I was awarded a Michelin Star. Dario and I have worked together to create some dishes, shared ideas and projects, but I personally cannot separate panettone from Christmas, so my interpretation is linked to the winter season.
You can't cook if you're not happy. Today I am lucky enough to know that I have inner serenity.
Other portraits
PORTRAITS/ChefMatteo Grandi – Matteo Grandi Restaurant in Basilica
PORTRAITS/ChefDanilo Angè – Chef, Consultant, Professor, Author – Milan
PORTRAITS/ChefPaulo Sverko – Ristorante Fančita Orsera/Vrsar – Istria Croazia
<?